It’s not often that a “school play” attracts five times the school’s population.
But Moree East Public School, a 128-student school in northwest NSW, drew a crowd of 600 for the Festival of the Brolga in the first week of December.
To be fair, it wasn’t any old school play: it was a two-day festival celebrating and showcasing the children’s year-long learning through the arts and culture of the local Aboriginal community, which culminated in an evening show at the school’s hall. It was quality theatre created by renowned national community arts company Beyond Empathy, with its 3Moree project in collaboration with Moree East Public School.
The Festival of the Brolga galvanised the community around the school – as was the plan – as part of the NSW Government’s Connected Communities strategy, forged between the Department of Education and Aboriginal Education Consultative Group (AECG) as part of Aboriginal Affairs’ OCHRE plan.

ABOVE: The eight-person Brolga puppet preparing for action in the school playground.
“I wholeheartedly believe that the connected communities strategy is the solution for improving education outcomes for Aboriginal children, and building relationships across the community, which sits at its heart,” BE executive director Kim McConville said.
Producing high-end art and theatre inspires a community, Kim explained, and leaves people wanting more, propelling them forward with a vision of what is possible. It is a strategy called “playing it forward”.
“Setting a bar high like that actually means you can lift up the spirit of the community,” she said.
And just after 7pm on Friday December 5, the Brolga began lifting. The 3.5-metre tall bird emerged from the darkening evening, towering over the stage. It was stunning; a collaborative sculpture built by the community from discarded bamboo, muslin and old tyre inner tubes over 10 full days. 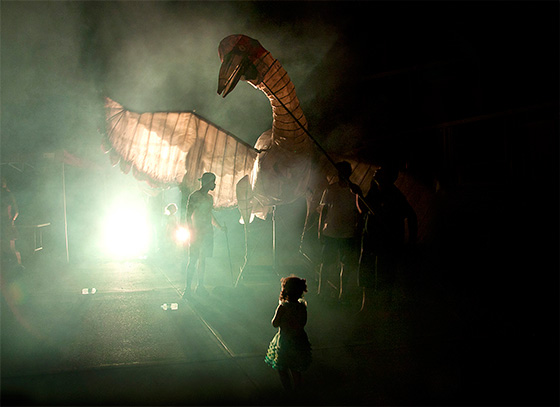 Lurching majestically into the spotlight, the puppet, operated by eight community people, provided a narrative thread through its tale of how it came to be. Old and new sat together in its story telling, intertwining traditional dance, language from the Gomeroi nation, and contemporary dance, movement and storytelling from the 91 students involved.
The multi-person brolga also provided metaphor. It was a community rebuilding itself from disparate pieces; each piece had a purpose and a reason to contribute to a finished whole, which was beautiful. Along the way, the combined efforts and common vision then re-engaged both the school kids and the community.
“It was beautiful – heart-warmingly beautiful, as one person said. We saw transformation in community participation, we saw transformation in individuals, and the transformation in hope that we could do it again.” 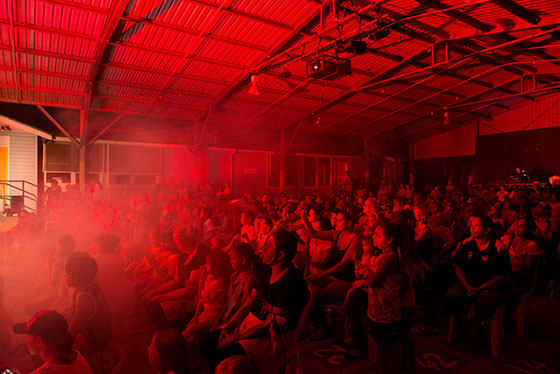 Community elder Auntie Paula was asked on the evening why the Festival of the Brolga had to happen.
Auntie Paula gestured towards to the parents, many of whom were in the school grounds for the first time in years, and pointed out the expressions on their faces.
“This is a once-upon-a-time story,” she said, “that has only just started.”
The festival showcased what was possible through creative learning. On Thursday night the Admire photographic exhibition opened at the Yaama Ganu Café and Gallery, with 24 artworks, including 12 large children’s portraits with multi media, and several grids with smaller portraits and five workshop documentations. Friday morning was the opening of the safety net in the school hall, in which children’s portraits were attached to a dream catcher with woven string, followed by the brolga performance that evening. 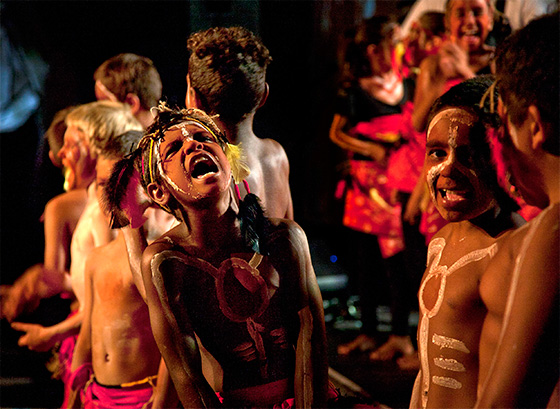 Photos by Raphaela Rosella. ABOVE: Boys from Moree East Public School on stage; BELOW: Cast and community on stage in the school hall. 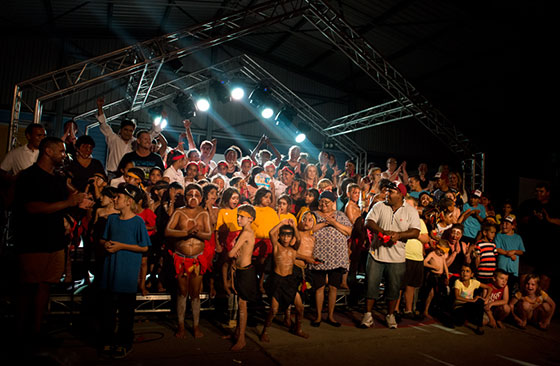