Tjerk Dusseldorp’s early experiences as a young man in the United States drew him to his life’s work in the not-for-profit sector. Tjerk, also known as Jack, worked as a documentary filmmaker in America in the 1960s against the political backdrop of the Vietnam War. Imbued with a desire to address social injustice, Tjerk returned to Sydney with his young family taking up the role of the first Executive Director of the Evatt Foundation.

The progressive think-tank founded in memory of Labor visionary Dr H.V. Evatt was chaired by Sir Richard Kirby, who became Tjerk’s lifelong mentor. It was through the Evatt Foundation that Tjerk launched WorldSkills Australia with its mission to promote and expand apprenticeships.  After visiting the then called “Youth Skill Olympics” in 1981 in the US, Tjerk was determined that 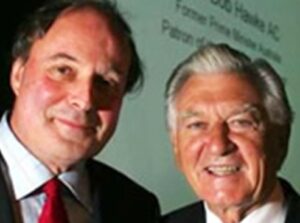 Australia would host the event as part of its Bicentennial in 1988.  He saw it as a means to attract national attention and support for vocational education and training going forward.

I’ve spent my working life advocating for a parity of esteem between vocational and general education. The upcoming Sydney 1988 “Skill Olympics” was cleverly promoted in conjunction with the 1987 Rugby League Grand Final, putting WorldSkills firmly in the Australian psyche.

Around this time, a separate conversation with his father had emerged.  Dick Dusseldorp was approaching retirement and considering his corporate legacy in Australia. Tjerk had earlier introduced his father to the WorldSkills model; its lean efficiency, and ability to make a difference nationally. Dick liked it and worked to raise corporate sponsorships. Their visions matched, as both saw the need for a sustainable, independent advocacy organisation that could focus on reforms to improve vocational learning in Australia. Launched in 1989 to mark Dick’s retirement from Lend Lease, Tjerk initially served as the Forum’s Executive Director while Dick was Chairman. Subsequently Tjerk took over the Chairmanship from John Goodman, an early WorldSkills supporter and inaugural Forum Board member.

Leading the work of the Forum for 25 years, Tjerk remained consistent in his approach, according to Dr John Spierings, the Forum’s senior researcher from 1998 to 2008. “Tjerk’s great capacity was to allow demonstration, research and advocacy – all three elements needed to create change – to work alongside each other. I think that is why the Forum has had a lot of traction and a lot of credibility, that spread of scope and facility to be able to communicate to a wide community of audiences. The Forum can be the honest broker, and it has brought its own very strong intellectual capabilities to that.”

Through his decades of work with WorldSkills and the Forum, Tjerk has been a tireless champion of youth and skills development in Australia and internationally. He was elected President of WorldSkills International in 1999 and for 12 years led tremendous growth of WorldSkills to reach 53 member nations, including India and China.

During his presidency he also initiated “Skills Across the World” which saw multi-national teams of young WorldSkillers deployed in African communities to build schools and improve their sanitation facilities.  This initiative was to be a forerunner of the creation of the international WorldSkills Foundation .

Tjerk stepped down as WorldSkills President at the conclusion of the 41st WorldSkills Competition in London in November 2011, which drew a record 200,000 people to its four-day event. To mark his contribution, HRH Princess Anne presented Tjerk with a City & Guilds Honorary Fellowship Award for his service to international skills development.

In 2009 Tjerk was awarded a Doctor of Social Science (Honoris Causa) by RMIT University, Australia’s leading dual sector institution. Tjerk was honoured and considered the honorary doctorate from RMIT particularly special because: “I’ve spent my working life advocating for a parity of esteem between vocational and general education.”

In his acceptance speech, Tjerk saw the doctorate as: “recognition for the effectiveness of the work of the talented multidisciplinary teams I’ve led over the past 20 years at the Dusseldorp Skills Forum, and for somewhat longer at WorldSkills, developing innovative solutions to entrenched problems and barriers”.

On the eve of the Forum’s 25th anniversary, Tjerk reflected on the inspiration behind his leadership:

“True to the Forum’s origins, our conviction remains that young Australians, equipped with the skills and knowledge needed to tackle tomorrow’s work opportunities, are our greatest resource to meet the larger challenges facing our society in the early part of the 21st century. Helping to liberate that potential is the reason we exist.”